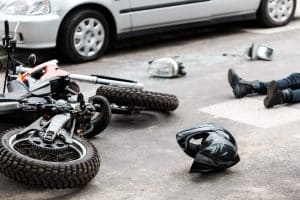 There is nothing quite like driving a motorcycle. It offers freedom and independence perhaps more so than any other vehicle. Like any other vehicle, however, it comes with its own risks and safety concerns. More dangerous than driving a car, a motorcycle offers little to no protection to its passengers, leaving them exposed to the elements. Experiencing an accident while on a motorcycle is often a life or death situation, and when the crash is with another vehicle, it is often due to that other driver’s negligence that the crash happened in the first place.

Larger vehicles are dangerous around motorcycles, with the smaller bikes being overlooked in blind spots that other drivers often do not check before merging or changing lanes. With the likelihood of a fatal collision high on a motorcycle, it makes it that much more important to drive carefully and defensively. One mistake by either the motorcyclist or another driver on the road can lead to a lifetime of suffering and medical treatments that can leave you financially destitute and physically changed.

How dangerous is it to drive a motorcycle in Ohio?

While Ohio does not see as many traffic accidents as warmer states such as Texas and California, according to the Times Bulletin, “In 2019, there were 3,585 traffic crashes involving motorcycles that resulted in 165 deaths and 3,245 injuries. Overall, 79 percent of motorcycle-involved crashes resulted in at least one injury or death.” NBC4 reported that from 2017 to 2021, motorcycle fatalities have been on the rise, shooting up by 42 percent.

A great number of these fatalities is due to the staggering number of motorcyclists who do not wear helmets, with the state ranking third for most fatalities involving non-helmeted motorcyclists. Helmets provide critical protection against head and brain injuries. Per NBC4: “Michele Piko, statewide coordinator for Motorcycle Ohio, said for some older generations of motorcyclists and advocacy group ABATE (American Bikers Aimed Toward Education) of Ohio, mandatory helmet laws are seen as infringing upon riders’ freedom of choice.”

However, of the 223 motorcycle related fatalities in 2021, 156 of those people were not wearing a helmet. Ohio is also near the top of the list of states with the most alcohol-related motorcycle accident fatalities with 32% of drivers being legally impaired at the time of the accident that caused their death.

How driving defensively can keep you safer when on your motorcycle

No one wants to take away anyone’s right to feel free on the road by driving, but we also want the motorcyclists of our state to be safe. Driving a motorcycle can encourage people to take more risks, drive a little more recklessly as adrenaline rushes to the brain, and the open road becomes more maneuverable. It is critical that motorcyclists understand the risks they take, and operate their vehicles with care so as to avoid those risks.

Developing defensive driving tactics is a good way to avoid ending up in an accident where you are likely to receive life-threatening injuries. Several ways in which you can practice defensive driving include:

While defensive driving tactics are great ways to avoid ending up in an accident or seriously injured, sometimes the drivers around you will behave in unpredictable ways that no type of driving can save you from. If you are smart and wearing your protective gear, you will avoid serious injuries, but it is unlikely that you will come out of that incident unscathed. This is when you need a personal injury lawyer to fight for your right to compensation from the person who was responsible for your injuries.

Why you need a Columbus injury lawyer

There is nothing more frustrating than being in an accident that someone else caused through negligence or recklessness. Whether the at-fault party was driving distracted, drunk driving, or driving aggressively, it is important that they are held responsible for your financial expenses and pain and suffering. A common and unfortunate type of accident among motorcyclists and drivers of larger vehicles is the hit-and-run. That is when it is practically necessary that you get the assistance of a lawyer. They can help you do everything possible to find the driver, or be compensated through your insurance.

If you have been in a motorcycle accident due to someone else’s negligence, Soroka & Associates can help. Our experienced personal injury attorneys will diligently work to ensure that you are compensated for your injuries. Call our office or submit our contact form to schedule a free initial consultation today. We proudly serve the people of Columbus and Central Ohio.